Then we too will join our voices in that great heavenly choir and sing, "Hallelujah Forever." 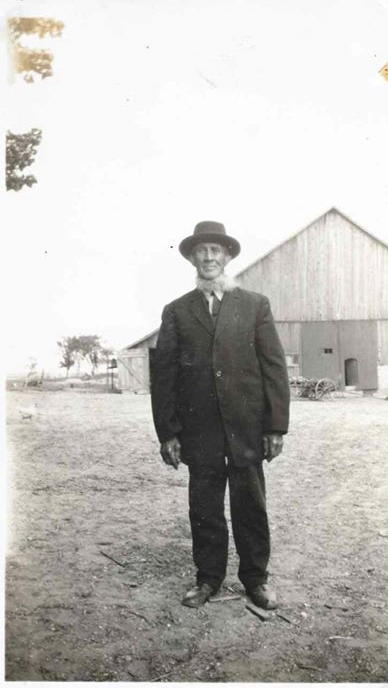 History of the Borculo Christian Reformed Church
by
Berend Blauwkamp July 12, 1933
(Written in poetry and translated in prose by Herman Woltjer)

A Dutch Songwriter once wrote a song, "How as a shadow the hours, days, months, and years fly away.  Nothing stays here forever."  We, as Dutch descendants can say  the same words.

It is the Lord who brought all of us here together.  So commemorable are His blessings in the past.  He gave us this day; so give Him the glory with thankful hearts.      Fifty years ago on this day we came together for the first time as a congregation.  I want to tell you some of the main facts and events which took place and led to this occasion.

In Borculo there was not much else to see other than lots of trees and shubbery; and hardly any roads to travel on.  But fifteen families had their mind made up to form a church, where they could worship the Lord.  It was with His help and guidance that they made a beginning on that goal.

Two ministers, Rev. Dowstra and Rev. Kuipers, came over to assist and organize their plans.  Rev. Kuipers, in his lecture, pointed out what we should do to form a church in which we could be instructed in God's Word;  and live accordingly and so travel on to our heavenly home.  First of all, we needed a consistory;  so finding Elders and Deacons was our first duty.  We voted and chose three Elders and two Deacons.  Elders chosen were B. De Haan, J. Nordo, and S. Dijstra, and as Deacons, H. Wiogmink and B. Blauwkamp, which is the same one as your speaker.

The schoolhouse was our first gathering place.  There we held our services.  Then came a nice surprise.  A well-known friend, J. Dragt, who had visited us once, bought a farm in Borculo.  He was a God-fearing man and willing to help.  So he became our leader, who took care of the sermons, (which otherwise were read by the Elders), and he taught the people to live in the fear of the Lord.  Soon the schoolhouse was getting too small to hold the growing congregation; and for the first time, plans were made to build a church.  Everyone, who was able to do so, donated their time and labor;  and logs were brought by sleigh or wagon.  Gerrt Moeke was the owner of a sawmill, and he too helped out, doing his share for nothing.

How hard they labored and when the foundation was laid, it was Brother Dragt who held a speech.  It didn't take long, and, after all, "Many hands make work lighter;"  that the church was ready.  With thankful hearts from now on they congregated in the church.  Brother Dragt stayed seven years;  a time filled with emotion, happiness, and blessings.  He received a call from Kansas, out of the West, which he accepted, seeing that as the Lord's will.

Disappointed at first and worried if we ever would get another minister.  It was again the Lord who took care of our needs.  To Him be the praise!

It was Rev. Grove, who came to visit his brother-in-law, Hofman, and while there, he preached for them.  Being there, and preaching, he felt sorry for this flock without a shepherd.  Before he left, he promised to come if he were called to be their minister, and he kept his promise when the call came.  Everyone was filled with joy;  but now they needed a home for the preacher.  Geert Moeke took care of that;  so when the minister arrived, the parsonage was ready to live in, and finished soon after.

However more changes had to be made, as with Rev. Grove, more members kept coming; with the result, that the church was getting too small.  Remodeling was done;  with thankful hearts, as they, ineverything, saw the blessing of the Lord.  Then the time came for Rev. Grove to leave, as he accepted a call from Grand Rapids.

In his place Candidate G.G. Haan was called and came.  It seems he did a lot of work outside.  He planted trees around the church and parsonage, which still give their shade.  This ambitious young man left us to work as a missionary; and in his place, came Candidate Vander Ark.  He was a fast and able worker, and took his calling seriously; especially ministering among the young people was his greatest joy.  Getting a call from Grand Rapids, he decided to go.

Rev.DeGroot took his place when he accepted to fill the vacancy.  It was a joy to listen to his preaching, gifted as he was.  In his sermons he used to say, "You have to be the salt of the earth."  But on everything comes an end;  so it was with his ministry here, as he accepted a call and moved to Graafschap.

Once again the parsonage was empty.  This time it was Rev. P. Kosten, a very wise and practical one, as one person described him; and "a person who didn't give anyone a chance to eat the cheese on his bread," another said.  And so he labored full of ambition, till he too made room for another, as he went East, as the Lord called him there.

Rev. Jonkman agreed to come.  He had outstanding ability and was very faithful in his preaching up to the time of his departure to the West, a place named Fulton.  His follower was Rev. Krohne from Paterson.  Nine years did he stay.  For him they built a new parsonage, which once was in danger of fire, but it was spared, and till this day is still standing, a welcome home for preachers who come and go.  Hudsonville called Rev. Krohne, where he went, a new place, a new start for him;  leaving Borculo vacant once more.

Every time a vacancy was filled again;  and it was Rev. Fortuin, who with much fervor, his ministry among us began.  Then one Sunday the church was struck by fire and burned to the ground.  How sad and distressful everyone was; and on our tongues lay the question, "Why, Lord?"  Bur seeing our own sinful hearts, and around us the immorality, deceitfulness, etc., we bowed our heads in shame and prayed for forgiveness.

In His goodness, He gave us the means to build again, and soon another church arose, where His Word was proclaimed from the pulpit.  And with another church another minister was installed, as Rev. Fortuin ended his ministry here.

It was Rev. De Vries who was willing to serve the Lord in Borculo.  He it is who is still faithfully caring for his congregation and very much appreciated.

With fifteen families we started in 1883.  Now fifty years later only four of them are still living.  They are Mr. & Mrs. P. Lamer, Mrs. Kuiers, and B. Blauwkamp, which as you know is myself.  The others were called home to their eternal place in God's presence, where we too soon shall be.  Now then we are on the eve of our lives.  Beyond us lies much sorry, pain, and cross.  But Jesus is faithful and never leaves us alone.  He will take care of us to the end and then we too will join our voices in that great heavenly choir and sing, "Hallelujah Forever."
Powered by